Further to my previous post, I see that the metalwork for what appears to be another set of these cameras has appeared on the A406 (North Circular Road) eastbound just before Henly's Corner. I have been having a think about what these cameras are for and I believe they are part of the proposed road charging scheme, failing that they are a really nasty set of average speed cameras.

As a reminder here are the details I posted previously.
During the last couple of weeks some new cameras have started appearing on London's roads. Each set is a gantry with five cameras pointing towards the oncoming traffic. So far I have seen three sites, the first is on the North Circular Road heading west at Neasden, it is this set that I have the most photos of and they appear at the end of this entry. The second set have appeared on the North Circular Road heading east just before McDonalds, just before the IKEA in Neasden and I have one long shot of these cameras, I am convinced this second set has gone up this week. I also noticed a third set on the A40 westbound between the White City overpass and Savoy Circus. What are these cameras, there are five on each gantry for a three lane road. They don't look like average speed cameras. Are they perhaps the first signs of the system needed for road charging? Maybe they are just more surveillance cameras. It would be nice if we, the taxpaying public were told what was being put up to - in one way or another - monitor us. 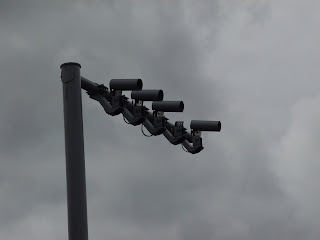 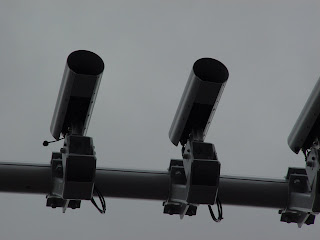 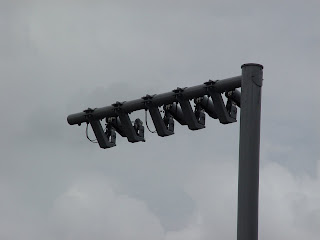 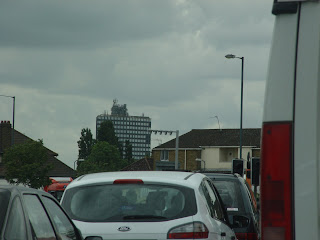 These cameras could also be used for LEZ enforcement.
They may well be multi-purpose, used for average speed and for ANPR. The ANPR can be used for a range of surveillanc purposes.

I too have noticed these in the past few days.
There is also a set at the juction of NCR and Brownlow Road at Bounds Green.
I find it hard to believe they are anything to do with spot speed,as the traffic at this point is slow 24/7. It may be to do with average speed, or horror of horrors a congestion charge for NCR. Again, difficult to believe as they are in the process of widening the road - a contradiction in its own right.

These "NEW" camera's have been installed for Automatic number plate recognition (confirmed)!

I think we can agree that they are for Automatic Number Plate Recognition (ANPR), the question is to what purpose? To just check for untaxed cars seems unlikely, more likely bearing in mind their locations on main roads would be for Road Pricing. I want to know why they are going up without any publicity at all.

Although someone says it is confirmed that it is for Automatic Number Plate recognition, from what I have seen, every one of them is not very far from a camera (be it speed camera or traffic lights) thus making me believe that they will be used for facial recognition.

Are these cameras part of the facial surveillance system being put in place around London for incoming traffic? If i am not mistaken there are rows of 6 on each pod on the A40 - (3 lanes x 2 seats!)

I believe camera systems, like the human eye have to focus on specific spots and unless the cameras are constantly scanning and refocussing or for each camera there is some fantastic software that undertakes analysis in realtime and sends the data on (I think not) they have their flaws, as mentioned in previous para.
J

I asked TfL about these cameras and the replay was as follows:

Thank you for your email dated 7 November with regard to cameras on the A406.

These cameras are part of the Low Emission Zone that will have a phased introduction from February 2008. For more information on the zone, please click on the following link -http://www.tfl.gov.uk/roadusers/lez/default.aspx.

Thank you for your enquiry and if you have any further questions or queries, please feel free to contact me.

To all motorists who were wondering....

You probably won't know much (if anything) about this new costly money grabbing scheme by Ken L.
I noticed new "speed" cameras appearing on gantries all over the N. Circular Road A13 etc. They have 5 cameras for a 3 lane road, so you cant drive down the white line and avoid being recognised.
They are for Kens new moneymaking scheme BEGINNING FEB 2008. Yes, not long.
The Low Emission Zone (LEZ) covers most of Greater London, following the Greater London Authority boundary. (i.e. most of the centre part of the M25) It will operate 24 hours a day, 7 days a week, every day of the year.

Different vehicles will be affected over time and increasingly tougher emissions standards will apply. Cars, motorcycles and small vans will not be affected. (Oh Yeah?, but of course I would have to trust ANY politician and believe what he says...)