More on the Damian McBride questions at PMQs 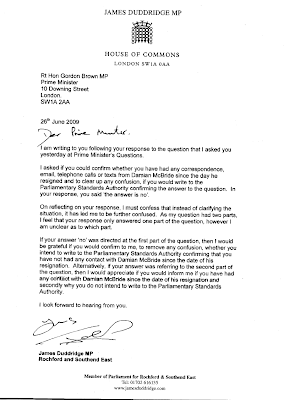 17 June and Conservative MP Lee Scott asked Gordon Brown if the government had received any informal briefings from the disgraced former spin doctor Damian McBride. Gordon Brown replied "I have not".

24 June and Conservative MP James Duddridge asked "Can the Prime Minister confirm whether he has had any correspondence, email, telephone calls or texts from Damian McBride since the day he resigned? And just to clear up the confusion there seems to be around this, could he write to the Parliamentary Standards Authority confirming the answer to this question?" Gordon Brown quickly replied "The answer is no" before launching a rather odd little attack on the fact that someone had dared to ask him a question he did not approve of. I queried which question Gordon Brown was answering no to. Was Gordon Brown saying no he has received no such correspondence from Damian McBride or no he won't write to the Parliamentary Standards Authority? It can't be no to the first and yes to the second as that would require a no and a yes answer. So why won't Gordon Brown put in writing that he has received no correspondence from Damian McBride?


I have subsequently been contacted by James Duddridge and he has sent the letter to Gordon Brown, that appears at the top of this post, raising just these points. I have little faith that a satisfactory reply will be received from Gordon Brown but we will see. In the meantime I wonder if another MP will raise the question at the next PMQs and how Gordon Brown will answer such a question.