Moving from A to C without at any point reaching B

I see that BBC journalist Mark Mardell has managed the almost impossible. He has moved from stating that

"there is very little to suggest that he adhered to a hard-line interpretation of his religion or that he had political or religious motives."

to criticising the FBI and asking

"If a soldier, a Muslim unhappy about waging war on other Muslims, gets in touch with a man well-known for advocating terrorism, shouldn't that "raise a red flag"? What do you think?"

Meanwhile the facts about Major Hasan's religious beliefs and links to Islamic terror keep emerging, not that you would know it from the BBC's coverage. I see that Major Hasan's business card has been see and here it is... 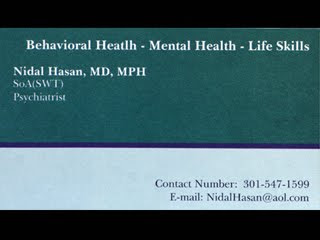 In case you are wondering, "SoA" is not a medical or US military qualification, it stands for "Soldier of Allah". The "SWT" that follows "SoA" stand for the Arabic words "Subhanahu Wa Ta'ala," or "Glory to Him, the Exalted." Muslims use these or similar words to glorify God when mentioning His name.

So we have a US Army psychiatrist who calls himself a "Soldier of Allah", who belonged to a mosque run by the radical Muslim Brotherhood and to which some of the 9/11 hijacking murderers belonged, who has possible ties to Pakistan, who gave a lecture to other doctors in which he said non-believers should be beheaded and have boiling oil poured down their throats, who apparently posted a defence of suicide bombing, who had a series of e-mail contacts with an imam who preaches violent jihad and has links to al-Qaeda - Anwar al-Awlaki and who shouted the Arabic phrase "Allahu Akbar!" [God is great] before opening fire. And yet the BBC still wont ascribe the word Jihad to the murders; why?

Meanwhile it saddened me to learn that US Army officials

"considered kicking Hasan out of the program but chose not to partly because firing a doctor is a "cumbersome and lengthy" process that involves hearings and potential legal conflict, sources told NPR.

Officials also believed they lacked solid evidence that Hasan was unstable and were concerned they could be accused of discriminating against him because of his Islamic identity or views."

Is political correctness that ingrained in the West that we cannot take defensive action for fear of being called a racist?