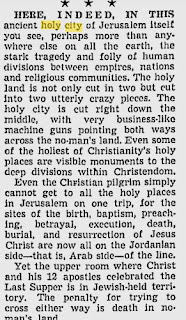 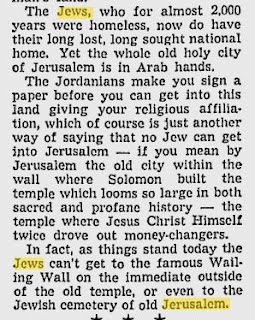 Today is the 45th anniversary of the liberation of Jerusalem from 19 years of Jordanian occupation following the 1948 war of independence. To the BBC and the rest of the Israel haters this was the day that Israel started its 'illegal occupation' of part of Jerusalem.

The above article is from December 1959, written by from Elmore Philpott for the Vancouver Sun, and describes Jerusalem as it was in those wonderful days before it was 'occupied'.

Contrast how the Jordanians stopped any Jews from worshipping in Jerusalem when it was under their control between 1948 and 1967 with how Israel has given control of the Temple Mount to Muslims who built two mosques on top of the ruins of the Jewish Temple and its courtyard.

I ask you to contrast the behaviour because the BBC and the rest of the Israel hating media won't ever present such information in case it ruins their carefully constructed narrative designed to vilify Israel and by extension all Jews whilst boosting the image of the Palestinians and all Muslims.


Thanks to Elder of Ziyon for the spot.