The conspiracy theory believers are still about 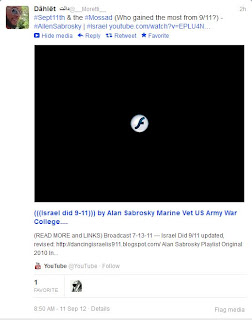 Do watch the interview with Alan (not Allen) Sabrowsky, note that it's with Iran's Press TV and that Alan Sabrowsky is reported to have said that "Americans must understand that they did it. And if they do, Israel is gonna disappear. Israel will flat ass disappear from the face of this earth." As for the conspiracy theories about 9/11, do I really have to go through this again? For the reality of how the Twin Towers and Tower 7 were destroyed I suggest reading Popular Mechanics. The Tower 7 conspiracy theory debunking can be seen here. This link also might be of interest to conspiracy theory believers. Do also remember that 'Al-Qaeda has repeatedly claimed responsibility for the attacks, with chief deputy Ayman al-Zawahiri accusing Shia Iran and Hezbollah of denigrating Sunni successes in hurting America by intentionally starting rumors that Israel carried out the attacks' Maybe also have a read of this article as well.
Posted by Not a sheep at 19:15