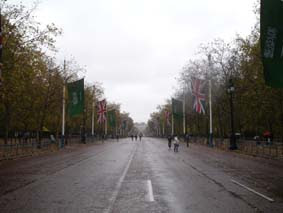 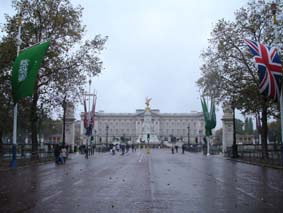 Take a trip down the Mall for a possible sign of things to come in this country; alternating Union Flags and a green flag with a scimitar and some Arabic writing on it. I assume this is to "celebrate" the visit of King Abdullah of Saudi Arabia to this country next week. It appears that some people are concerned about this visit. There was an Early Day Motion put down about this visit in the House of Commons on Thursday 18 October, see here "2102 STATE VISIT OF KING ABDULLAH OF SAUDI ARABIA 11:10:07
John McDonnell
Mr Andrew Dismore
Jon Trickett
Kate Hoey
Mr David Drew
Jeremy Corbyn
* 17
Dan Rogerson Kelvin Hopkins
That this House notes with concern the state visit of King Abdullah bin Abdul Azaz al Saud of Saudi Arabia to the United Kingdom on 30th October 2007; believes that Saudi Arabia is one of the most repressive societies on earth, with no political parties, free elections, independent media or trade unions; views with alarm the systematic human rights abuses that exist within the Kingdom, such as the lack of basic rights for women, the practice of public beheadings and the repression of homosexuals; condemns the recent sale of 72 Eurofighters to such a barbaric regime; and calls upon the British Government to base its foreign policy towards Saudi Arabia on democracy and human rights rather than on narrow economic interests."

I rarely agree with Jeremy Corbyn but in this case I do.


UPDATE:
I have just blogged that the Arabic wording on the flags translates as "There is no god but Allah and Muhammad is his messenger", it is "The Shahadah", the Islamic creed - the Muslim declaration of belief in the oneness of God and acceptance of Muhammad as his final prophet.

Vincent Cable has also been on the radio this morning explaining why he will not be meeting King Abdullah on his State visit.

NotaSheep agreeing with Jeremy Corbyn and the leader, albeit temporary, of the Liberal Democrats; strange times indeed.