I was listening to the News Quiz tonight and as usual there was a joke at the expense of George Bush, who may or may not have had his watch stolen whilst in Albania - Daily Mail article this week. Now this of course was an opportunity to joke at how stupid George Bush is - Alan Coren included the following humorous remark "the really unbelievable thing is that he can tell the time (audience laugh) by reading his watch .. the big hand's pointing upwards, the little hand's just next to Mickey Mouse's left ear (more audience laughter). Yes it is hysterical the thought that George Bush cannot read a watch but it is the received opinion and it is frequently alluded to, if not actually stated, by the BBC. What do you think, is George Bush an idiot?

Before you answer, please read the following that I found and sometimes "quote" from Eject Eject Eject.
Here is a picture of the flight controls of a F-106 Delta Dart, this being the successor plane to the F-102 Delta Dagger that George Bush flew whilst in the National Guard. The F-102 was a supersonic fighter-interceptor that cruised at around 845 mph. 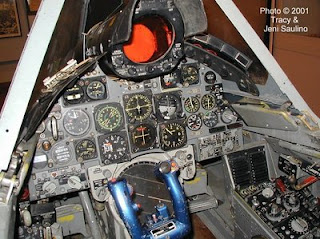 Quite a few dials and controls there for George Bush to read and use. "Now, picture yourself in this chair, at 40,000 feet, traveling at one and a half times the speed of sound. Now imagine that someone has painted the windows white – you are flying on instruments. Now imagine that not only do you have to be able to fly blind, by referencing these instruments, but that you also have to stare into that orange jack-o-lantern of a radar, and interpret a squiggle that will lead you to your target. Now imagine that in addition to not hitting the ground, or your wingman, and watching the squiggle, you also have to turn those switches on the right side panel to activate weapons systems, to overcome enemy countermeasures…without looking outside, as you hurtle through air at -40 degrees F, air so thin that should you lose pressure, you have about 4-6 seconds of consciousness before you black out and die." Still think George Bush is an idiot?

"Here is a random question from the instrument rating exam I had to pass a few years ago. 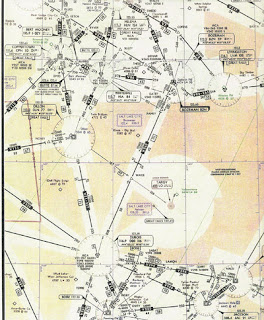 What should be the approximate elapsed time from the BOSEMAN (BZN) VOR to the DUBOIS (DBS) VORTAC if the wind is 24 knots from 260 degrees and your intended True Air Speed is 185 knots? (The magnetic variation is 17deg. E)

If he had been a civilian rather than military pilot, Dubya would have had to have passed 60 questions like this with at least 70% correct. Questions on weather, radio communications, mechanical systems, aerodynamics, pilot physiology, airspace, navigation and a hundred other things. But, since he was military, he also had to know how to operate that primitive in-flight radar, plus weapons systems, rules of engagement, electronic warfare, hydraulics, fuel systems…it goes on and on."

Could you answer this question? No, but then you're probably not a civilian, let alone a military, pilot. Do you think that someone who could answer that sort of question correctly, without the use of a calculator (not invented when George Bush was flying), maybe with a slide-rule and understand aerodynamics and the other items in the above list is an idiot? Do you think that someone who could fly that plane is stupid?

What George Bush is, is inarticulate. He doesn't always come up with the right word in the right situation, but he is not stupid.

So what do you say Alan Coren?

Unlike Alan Coren, George W.Bush did not drive a magazine with a legendary brand, a worldwide reputation and a natural market (Punch) to bankruptcy.