Watts Up With That has an incredible analysis of Climate Change data. Do read the whole long article, it is very detailed and quite eye-opening:

What on earth justifies that adjustment? How can they do that? We have five different records covering Darwin from 1941 on. They all agree almost exactly. Why adjust them at all? They’ve just added a huge artificial totally imaginary trend to the last half of the raw data! Now it looks like the IPCC diagram in Figure 1, all right … but a six degree per century trend? And in the shape of a regular stepped pyramid climbing to heaven? What’s up with that?

Those, dear friends, are the clumsy fingerprints of someone messing with the data Egyptian style … they are indisputable evidence that the “homogenized” data has been changed to fit someone’s preconceptions about whether the earth is warming.

One thing is clear from this. People who say that “Climategate was only about scientists behaving badly, but the data is OK” are wrong. At least one part of the data is bad, too. The Smoking Gun for that statement is at Darwin Zero." 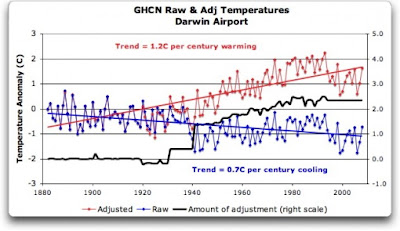 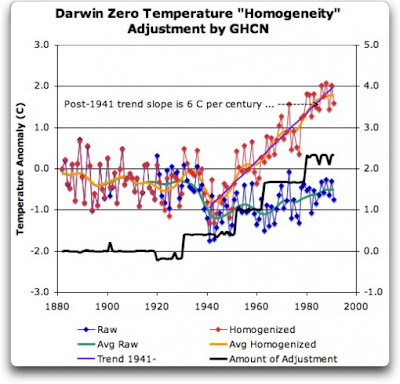 
Any passing warmists care to comment?
Posted by Not a sheep at 20:30

But so much of the data is 'questionable'. Take a look around Watts Up with That, Bishop Hill, Climate Audit etc. and you will see the truth...

What I would need to do in order to properly investigate this claim is:

1. compile an index to all the data sources known to support the AGW hypothesis
2. investigate each of the sites you mention
3. from those sites, attempt to determine which specific datasets they are questioning
4. flag those datasets on the list

If the number of remaining datasets starts to look a little anemic, then your case will have been proven.

Unfortunately, I don't have the time today... if you happen to know of an existing index to GW datasets, that would be very helpful.

Without such an index, however, I'm not sure it's reasonable to claim that the majority of the data are questionable. How many datasets are there overall, and how many have been called into question?