Paris attack highlights Europe's struggle with Islamism per BBC News but the biggest worry is, Islamophobia 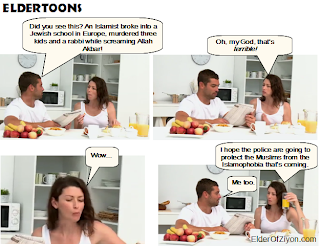 This BBC report ends as any good BBC politically correct article would.

'But the potential backlash, including support for far right parties and groups, may well hurt ordinary Muslims more than anyone else, leaving the authorities and religious leaders in western Europe wondering how to confront violence in the name of religion without victimizing minorities or being accused of 'Islamophobia'.'

Yes for the BBC ordinary Muslims are hurt more by a' potential' backlash than cartoonists and Jews are by being murdered.

The BBC really are sick.

Is this how BBC, Guardian and others really think?
Posted by Not a sheep at 13:11

I am getting increasingly annoyed with some of the media, and in particular the BBC, who constantly refer to people who are concerned about what is happening as suffering from “Islamophobia”. The dictionary definition of a phobia is the irrational fear of something. I can assure you that there is nothing irrational about my fear of what is happening in Europe and in my country, my fear is very real and has increased as a result of recent events.