Words fail me, this was a British Doctor tweeting this morning 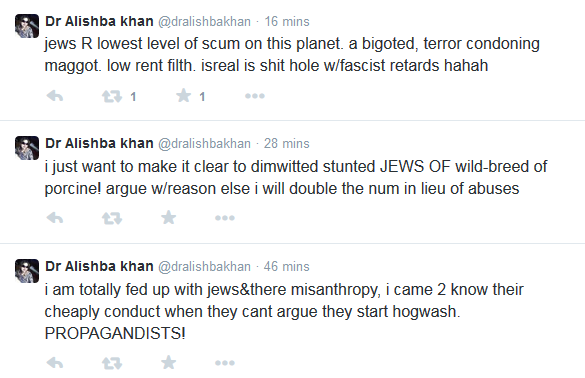 How can a British doctor hold and express such views and be allowed to carry on practicing in the UK? Would any Jew feel safe going to see a doctor who freely expressed such views?

I, and others, have reported Dr Alishba Khan to the General Medical Council. In a sane world they would take serious and appropriate action but in 2015 Britain, I fear that they won't.

Email ThisBlogThis!Share to TwitterShare to FacebookShare to Pinterest
Labels: Anti-semitism

I like the "dimwitted" bit ! This from someone whose command of the english language renders him unfit to be a medical doctor (if indeed he is).

I thought that this kind of racial abuse was illegal in UK ?