Debt is the problem

'Western governments' reliance on debt now is extraordinary.
The G7 countries have, on average, 50 percent more debt in 2010 than in 2007. This is an average figure: the below, using IMF data, charts how much debt they have taken on. No prizes for guessing which country raises the average: 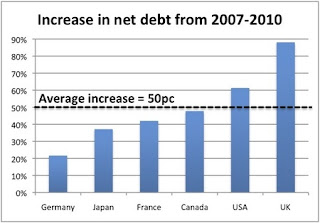 You can read more, much more, in Fraser Nelson's piece for The Spectator and in Johan Norberg's piece entitled 'The great debt bubble of 2011' - vert scary stuff!