Imagine the furore if a Christian or Jewish group in the UK set-up a website and poster campaign entitled 'Ramadan is Evil'; the BBC would be apoplectic. However thee is not a word when a Muslim group calling itself 'xmasisevil.com' and claiming to be 'Representing the Muslims living in the uk' sets up a website calling Xmas 'the path to hellfire' and including a section headed 'Fruits of Christmas' that runs thus:

On the 2nd day debt

On the 3rd rape

On the 4th tennage pregnancy


There is also a poster campaign 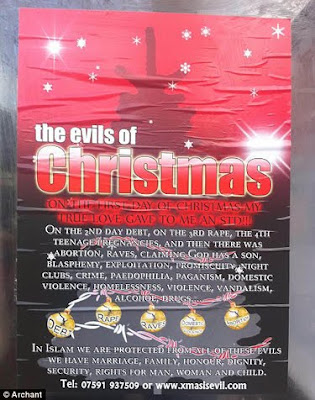 So where's the media fuss? Why are an Islamic group allowed to make such deliberately provocative claims about one of the key dates in the Christian calendar when I am sure any similar campaign aimed at Ramadan or another Islamic festival would be (rightly) attacked from all sides?
Posted by Not a sheep at 09:38