The BBC are please to report that:

Mr Burley lost parliamentary private secretary post after he was photographed at a stag party in the Alps with a man wearing Nazi costume.

A Downing Street spokesman declined to comment about the decision by the French authorities to investigate the stag party but reiterated that Mr Burley's conduct had been "offensive and foolish".

Possible charges under French law that could stem from wearing Nazi uniforms include incitement to racial hatred and being an apologist for Nazi war crimes.'


If it is so disgusting to be photographed with a man wearing a Nazi uniform, so disgusting in fact that the BBC also tell us that:


'Ian Austin, shadow work and pensions minister and Labour MP for Dudley North, said: "David Cameron and the Tories tried to brush this under the carpet, but the scandal surrounding Aidan Burley's disgraceful conduct is not going away.

"Surely the prime minister must take the whip off Mr Burley while this investigation is taking place." '

... then what action should be taken against an MP who has been pictured actually wearing a Nazi uniform? If it was a Conservative MP then I am sure that the BBC would be giving publicity to people calling for the expulsion from the Conservative party. However as it is a Labour politician, indeed the Labour politician who the BBC still hope could lead their beloved Labour party, Ed Balls, the silence is deafening and I have yet to see any reference to this photo on the BBC... 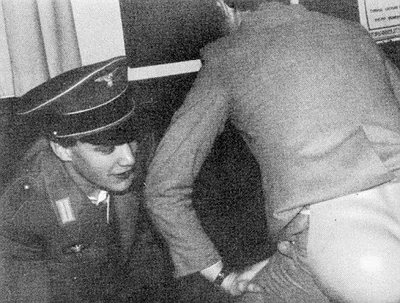