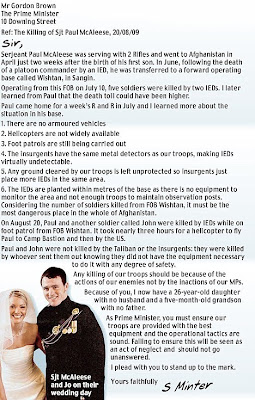 Read more in The Mail.

The way that Gordon Brown has starved the UK armed forces of equipment when he was Chancellor and now as Prime Minister is nothing short of disgraceful. However I suppose from his point of view there are more votes in giving benefits to illegal immigrants who might then vote Labour than in properly equipping the men and women who fight wars on his behalf. Anyway there are so few members of the armed forces (less every day as they oddly keep getting killed) and how can you expect Gordon Brown to empathise with men and women of honour and bravery?