The BBC's Richard Black reports the news that:


'2010 was the warmest year since global temperature records began in 1850 - although margins of uncertainty make it a statistical tie with 1998 and 2005.

The World Meteorological Organization (WMO) concludes 2010 was 0.53C warmer than the average for the period 1961-90 - a period commonly used as a baseline.


Interesting... but hidden away in Richard Black's report is this piece of information:


'The possibility that 2010 would emerge as the warmest year on record was raised by scientists after the year began with a period of El Nino conditions - unusually warm waters in the eastern Pacific Ocean, which transfer heat from the ocean to the atmosphere.

However, a switch to the opposing La Nina conditions halfway through the year cast doubt on whether the record would be broken.'

Hold on is it man made global warming that is responsible for 2010 being so warm or El Nino? As I understand the recent world temperature record, since 1998 we’ve had three warm years – 1998, 2005 and 2010 – and each of those years is associated with an El Nino event which causes or is related to the warming.

Richard Black finishes his article with a clear explanation of the facts as he sees them:


'Agencies including the UK Met Office suggest 2011 is likely to be cooler on average than 2010, as La Nina conditions dominate.

The variation between El Nino and La Nina can alter the global temperature by half a degree or so.

But the variations it produces sit on top of a slow, steady warming trend dating back half a century, ascribed to the buildup of greenhouse gases in the atmosphere from industry, agriculture, deforestation and other human activities.'

Of course all of the statements on global warming have to be taken with a very large pinch of salt bearing in mind the following:
1. Willis Eschenbach's recent letter in which he points out that the IPCC Fourth Assessment Report Summary For Policymakers (2007) says nothing about humans being the cause of global warming

2. Jo Nova explains that 'the world has been warming for 300 years, long before the industrial revolution. The trend hasn’t changed as our emissions rose. No one knows exactly why it started rising back then, but it wasn’t CO2'

4. Jo Nova explains that 'Sure, and the records have been set with thermometers... next to concrete and exhaust vents... There probably weren’t too many car parks or air conditioners in 1880 either. Not to mention the non-random adjustments, and that mystery about how 75% of thermometers are ignored.'

7. The ascribing of man as to blame for global warming is not the consensus, take a read of this recent piece of mine that explains why the oft-quoted 97% figure is not what it appears to be

8. The rise in world temperature seems to have happened in line with the fall in the number of temperature measuring stations, here's a helpful graph... 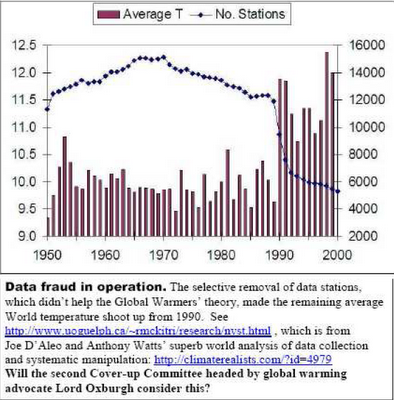 So The World Meteorological Organization (WMO) conclusions that 2010 was 0.53C warmer than the average for the period 1961-90 need qualifying but that seems to be something that Richard Black is unwilling to do.