The Shah of Iran ran what was decribed as a bloody dictatorship. There was a popular uprising that turned into a revolution and his regime was replaced by a regime of Islamic fundamentalism has been a source of trouble and terrorism ever since.

President Mubarek has run what is now being called a dictatorship. A popular uprising is underway, there very well might be a “revolution” leading to the installation of Mohamed Elbaradei as President. Behind the scenes the most powerful opposition party, The Muslim Brotherhood, is looking for how to take power; the Muslim Brotherhood are Islamic fundamentalists.

But Egypt is a land of long history and of moderate Islam we are told. Reallya a recent Pew poll found that significant numbers (and sometimes majorities) of Egyptian Muslims don't sound very moderate to me:


'In Egypt, 30 percent like Hizballah (66 percent don’t). 49 percent are favorable toward Hamas (48 percent are negative); and 20 percent smile (72 percent frown) at al-Qaida. Roughly speaking, one-fifth of Egyptians applaud the most extreme Islamist terrorist group, while around one-third back revolutionary Islamists abroad. This doesn’t tell us what proportion of Egyptians want an Islamist government at home, but it is an indicator.

In Egypt, 82 percent want stoning for those who commit adultery; 77 percent would like to see whippings and hands cut off for robbery; and 84 percent favor the death penalty for any Muslim who changes his religion.

Asked if they supported “modernizers” or “Islamists” only 27 percent of Egyptians said they favored the modernizers while 59 percent said they backed the Islamists.'

So is it more likely that Egypt will become a seclular democracy or an Islamic theocracy? 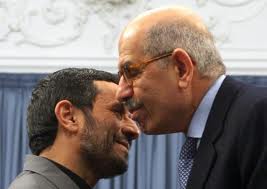 Here's a photo of Mohamed Elbaradei and Mohammed Ahmadinejad, could this be an image that we will see again and again over the coming years, symbolising the new coseness of Egypt & Iran?