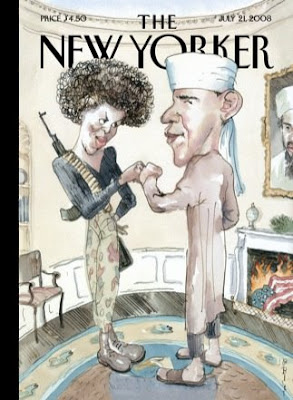 This New Yorker cartoon has generated a lot of fury as the usual suspects have fulminated long and hard at the sheer vileness of portraying Barack "messiah" Obama and his delightful wife as anything other than pure of mind and deed. Even John McCain had to condemn the cartoon or face the full fury of the liberal media.

I wasn't going to bother posting about this as it seemed so predictable, but then I found this article by "A Western Heart" which points out that a cartoon depicting John McCain in a Vietnamese bamboo cage being tortured by Barack Obama, Hillary Clinton and oddly George W. Bush received no such condemnation. The John McCain cartoon is this one... 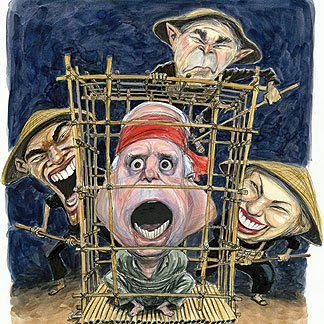 As A Western Heart says:

"It is an example of the golden rule of hate speech: Only conservatives can utter hate speech (or hate cartoons) while anything that Leftists say is "free speech", no matter how offensive it is."