The Swedish newspaper "Aftonbladet" recently accused the Israeli Army of trading in Palestinian body parts. There was no evidence and the newspaper have now apologised but the story is out there and another "blood libel" is spread. Here's a picture of a demonstrator at a recent pro-Hamas demonstration in London. 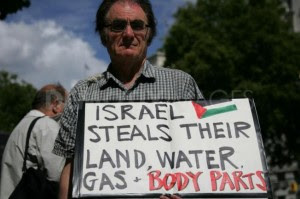 I wonder if this demonstrator will be outside the Chinese embassy as the China Daily - citing unnamed experts - said this week that more than 65% of organ donations came from death row prisoners. It is acknowledged that China executes more people than any other country; Amnesty International said at least 1,718 people were given the death penalty in 2008.
Posted by Not a sheep at 09:00