Labour centralising control-freakery returns, assuming it had ever gone away 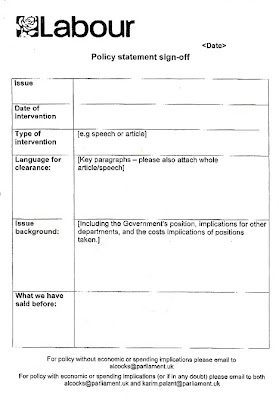 The Mail reports that:


'Ed Miliband and Ed Balls were accused last night of treating their Shadow Ministers ‘like children’ after ordering them to fill in a form before doing or saying anything in public.

Shadow Ministers are banned from mentioning money without permission from Shadow Chancellor Ed Balls and cannot open their mouths unless they have specific approval of their precise choice of words from the two Labour leaders.

Nor can they back non-parliamentary campaigns without clearing it with the two men.

The Labour questionnaire, described by one party insider as ‘control freakery gone mad’, and leaked to The Mail on Sunday, includes boxes headed Type Of Intervention, Language For Clearance and Issue Background – all with helpful hints on how politicians can comply.

Until now they had to be sent to Mr Miliband’s economics adviser, Torsten Henricson-Bell.

It seems to me that Ed Balls is trying to do to Ed Miliband what Gordon Brown did to Tony Blair for so many years - take control of all spending decisions and thus increase his power base in the party. Whilst it will be a pleasure seeing the two Eds fight for control of the Labour party, it will be less pleasurable as I realise that one of these two unpleasant fools is likely to be prime minister by 2015.