Those delightful 'lefties', how much nicer they are than the 'nasty Tories' 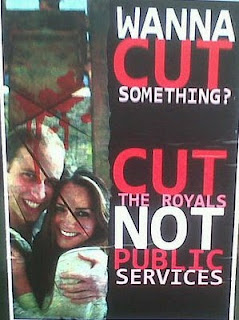 These posters have started appearing in North London and show the sheer loveliness that spews from many leftists. Could this sort of poster be seen as incitement, or would a court see it as free speech?

This sort of attitude is actively assisted by the reporting of such as The Guardian, The Independent and the BBC who keep reporting on the 'costs of the Royal Family. I did demolish this one-sided argument last November, here's how:


'The BBC and various anti-monarchist groups are misrepresenting the cost of the UK monarchy again and this has annoyed me. This piece repeats the familiar misrepresentation that:

This looks at just one side of the equation: the costs of the Civil List which is soon to be replaced by the awfully named "sovereign support grant". The other side that is as usual ignored is that in 1760 it was decided that the entire cost of the Civil List should be paid by Parliament in return for the monarch surrendering his hereditary revenues from the Crown Estate to Parliament for the duration of George III's reign. This agreement with some alterations is still in place today.

So how much is the The Crown Estate worth to the UK taxpayer? The last figures I saw was around £190 million a year.

So why does the BBC insist on repeating the cost of the Royal Family <£40 million a year but ignores the income forgone by them in return for the civil list of around £190 million?'

Thanks to Archbishop Cranmer for the poster spot.

But the 1760 deal was not as simple as that. Parliament also took over what is now the civil service and the running of the armed forces as part of it. The Monarch, who previously funded the Navy and Army could no longer afford to do so because we were at war with so many people.

Add these costs to the equation and it is not such a good argument to make!