Hating Israel and Jews on the streets of London

Israelly Cool alerts me to a horrific piece of news, I quote from the StandWithUs press release:

A small number of pro-Israel protestors, including supporters of StandWithUs, participated in a peaceful protest against the “Celebrate Palestine Festival” event held at the University of London’s School of Oriental and African Studies [SOAS] on March 20th. The event included calls for boycotting Israel and libeling it as an “Apartheid” country.


The pro-Israel protesters were standing at the university, with signs behind them pointing out that Israel is the opposite of an ‘apartheid’ country and calling for a peaceful two-state solution between Israelis and Palestinians. They peacefully discussed these issues with attendees, only once approached by people. The police had given them permission to be there.

Anti-Israel activists then engaged them in conversation. One man verbally assaulted them with anti-Semitic slurs, saying, “the best thing that Jews have ever done was to go into the gas chambers.  It was the best thing to happen to Germany to have been cleaned of Jews.  The same thing needs to happen in the Middle East.”  Another anti-Israel activist then punched and bit a Jewish member of the group, who was hospitalized.  This was an unprovoked attack.  His attacker was later arrested by police.

StandWithUs unequivocally condemns the disgusting act of violence against peaceful Israel supporters on the SOAS campus. The attacker evidently was spurred on by the hate-filled, one-sided event taking place at SOAS.

“I am totally shaken and distressed by what happened. One of the most disturbing things is that the people involved, fearing negative publicity…started accusing us shouting, “how dare you come here? It’s a Celebrate Palestine event, you knew what would happen. You asked for it.’ I didn’t think I would ever get to a stage in which I would feel like a Jew in Nazi Germany, and I don’t say it lightly,” reported StandWithUs-UK Coordinator Gili Brenner who was one of the pro-Israel demonstrators.

“It is unacceptable that violent rhetoric by Palestinian supporters spills over into violent actions. We expect the university to condemn this attack and those who incited it. Universities must have a policy of zero tolerance policy for hate speech and anti-Semitism. They should carefully monitor incendiary events like ‘Celebrate Palestine’ to ensure that hate speech, violence, and suppression of free speech do not occur,” said Michael Dickson, StandWithUs-Israel Director who was in London during the incident.


“Unfortunately, the kind of blatant anti-Semitism, bigotry, and incitement to hatred that occurred at SOAS  lurk at the bottom of far too many anti-Israel events on campuses. They frequently become a toxic brew that can lead to physical violence as they did in this case.  They also prevent any serious discussion of the issues, and often lead to intimidation and the suppression of free speech, as they did in London,” said Roz Rothstein, CEO of StandWithUs.


“It is unthinkable that in the UK people can be prevented from peacefully demonstrating and expressing their opposition to incitement, hatred and blatant anti-semitism which, given the outrageous comments about Jews this undoubtedly was. It is important that the right to challenge anti-Israel events be protected, and Israel’s supporters must not be intimidated or silenced by the mindless violence that occurred on Sunday,” commented Joy Wolfe, UK Chairman of StandWithUs.

Yes you did read that correctly  'Another anti-Israel activist then punched and bit a Jewish member of the group, who was hospitalized'. This attacker was arrested I hope that they throw the book at him but no doubt he will be excused because he was provoked by having to seee Jews at a SOAS event.

This story does link with the news of the recent murder of five members of the Fogel family in Israel:
'Meanwhile, this should also indicate to you what kind of people these “anti-Israel” protesters are:


When someone erected a placard with photos of the massacred Fogel family it was immediately surrounded and covered up by a Palestinian flag. Anti-Israel protesters were parroting the line from Palestinian Authority affiliated news agencies that the massacre at Itamar was committed by a Thai worker. 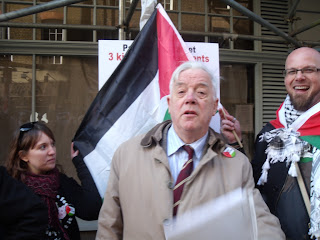 Notice the “man” on the right, smiling as he hides the photo of a murdered family.
If you still feel that these protesters are solely motivated by a genuine feeling that Palestinians have been unfairly treated by Israel, I doubt even a bite on your cheek would wake you from your stupor.'

Two further points; first if a pro-Israeli protester had attacked a pro-Palestinian protester at a London University then somehow I think the BBC would have covered the story but as this is a **** bit Jew story, not a word from tat organisation. Second I have blogged about SOAS before, take a look, and do wonder about an 'educational' establishment that has taken money from Saudi Arabia and the even more unpleasant Iranian regime. I wonder how the Point of No Return will be received at SOAS this week and whether the anti-Israeli faction will be able to keep their mouths shut or whether Jewish face will be on the menu again?

I never attend events like this because I know I will end up hitting some shit-for-brains fuckwit and thereby give the whole counter demonstration a bad name.