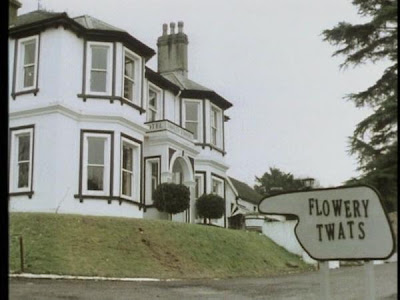 All day long the BBC (and others) have been trying to create a fuss over David Cameron's use of the word "twat". How terrible, how unacceptable, how rude and such a bad example to set the youth of this country etc.

Maybe the BBC should take a look at the sign outside the hotel in episode 11 of Fawlty Towers; a sign that reads "FLOWERY TWATS"; I don't recall any fuss being made after any showing of this episode known as "The Anniversary".


I wonder if there is any video of a senior politician setting an even worse example to the youth of the UK? Oh yes, here it is, not that you will ever see it on the BBC...
That's the truly disgusting video of Gordon Brown picking his nose and wiping the results on his tie... whilst sitting on the front bench as Tony Blair answers PMQs. It takes a truly odd person to do that and not realise that they might be seen; weird, really weird.

I dunno why they are making a fuss about the word twat but I do know the BBC are a bunch of cunts.