Why are the BBC not interested in John Prescott's expenses?


'Guido has now seen Prescott’s government credit card bill from 2004 through to 2006. It seems he was a big fan of upmarket Westminster canteen Shepherds and has spent £2,073 in Pret a Manger, including £240 in one sitting. Prezza enjoyed the high and low life, with The Cinnamon Club and Clacket Lane Service Station all featuring. What government business was the Deputy Prime Minister doing in a Morrisons supermarket cafe? Three hundred quid steak dinners on the taxpayer? '

How on earth do you spend £240 in one sitting at Pret a Manger? At £8 a head (and that's quite generous) that's lunch for 30 people; did John Prescott really buy lunch for 30? If not did he eat his own way through £240 of food in one sitting?

More intriguing was this article that revealed something more questionable than greed:


'Prezza’s spending on government credit cards knows no bounds. The Telegraph have gone big on the £456 he spent at the Star City casino in Sydney, the £490 at Doyle’s seafood restaurant in Watson’s Bay and £75 at an aquarium in 2004. However Guido understands there is even more to come on this one. Why for example is there an entry for “Miscellaneous Cash” from an Australian hole-in-the-wall:

Leaving aside the obvious financial malpractice of withdrawing cash on a credit card, especially in a foreign country, why on earth was this happening in the first place. What was the £160 spent on and where are the receipts?'

All fascinating questions about the expenses policy operated by the former Deputy Prime Minister. So I turned to the BBC to see how they were covering the story already in The Telegraph and on the web and what did I find? Nothing... I searched the BBC news website for John Prescott and found nothing about this story at all. The last John Prescott related article told us that 'Former Hull MP John Prescott is auctioning off gifts he received in his role as deputy prime minister.' 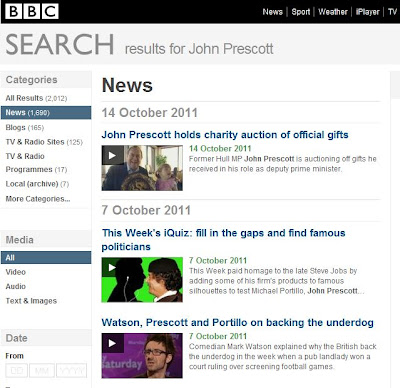 So why no coverage of this story BBC?


As an addendum I also note that whilst The Telegraph find the space to report that 'Tessa Jowell oversaw £13,000 spend on cakes and pubs' in a piece about odd expenses during her time at the Cabinet Office, including 'Nearly £50 was spent at Seastar Superbikes'; the BBC report nothing of the story.