Do you really have to ask if the latest Euro bail-out will actually work? Of course it won't, it has bought some time that is all. So what does the future hold for us in the pampered Western countries whose leaders bought votes and made themselves feel moral and liberally minded by expanding the welfare state so it became no longer a safety net but instead a lifestyle choice for the lazy and feckless?
Berliner Zeitung have this cartoon 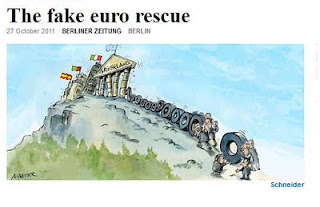 But I think that this article in The Telegraph by Liam Halligan is a fuller read, if a scarier one. Do read the whole piece but here is an excerpt to depress you on a Sunday afternoon:


'Having said all that, the prospect of "haircuts", however half-hearted, now looms over eurozone sovereign bond-holders, not least fragile European banks. So Thursday's announcement also stressed that the €440bn (£386bn) euro European Financial Stability Facility would be "levered", allowing it to borrow to make it bigger. This is supposed to allow the eurocrats to raise cash without having to trouble national parliaments, given that they're likely to refuse.

The question of who will lend to the EFSF, on whose collateral, and who will ultimately repay the loans, was barely addressed last week. Such tricky questions will apparently be answered at the next European summit in December. Meanwhile, the fundamental disagreement between France and Germany regarding who should take the biggest losses – eurozone governments or private creditors – remains unresolved. Since Thursday's announcement, though, Germany's powerful constitutional court has issued an injunction requiring the country's full Parliament to approve any EFSF bond-buying.

What is needed, urgently, is a clean, transparent Greek default – allowing this flailing semi-developed economy to leave the eurozone, re-establish a weaker drachma and regain its self-respect. Portugal should leave too, its membership of the same currency bloc as Germany is as absurd, and self-defeating, as that of Greece. There would be further market turmoil, yes, but a few more months of volatility, leading to an ultimately more stable outcome, is surely better than the current situation where the entire world is living in fear of a massive "euroquake".

The eurocrats, of course, lack the guts to trim back monetary union to a more manageable size. Too much face would be lost. So "euroquake" fears, once viewed as outlandish, are gaining pace. Despite Thursday's deal, and all the reassurances of a "durable solution", the Italian government on Friday paid 6.06pc for 10-year money, up from just 5.86pc a month ago and a euro-era high. Such borrowing costs are disastrous, given that Rome must roll-over €300bn of its €1,900bn debt in 2012 alone. A default by Italy, the eurozone's third-biggest economy, and the eighth-largest on earth, would make Lehman look like a picnic.

The eurozone must be consolidated. World leaders should similarly force European banks to disclose their losses, we all take the hit and then we move on. Instead, we are served-up, in ever more complex variants, the same "extend and pretend" non-solutions. It gives me no pleasure to write this, but I give this deal two weeks. '

Meanwhile I have just found a stonking piece on this same subject and along similar lines at the ever readable Alex Masterley. This particular piece is ostensibly about how capitalism has not failed but lives on in China and India, facts that are clear to anyone who has visited China and/or India and seen the dedication and attitude to hard work that pervades so much of those countries. However it is the second half of Alex's article that interests me more here today:
'So what is the problem in the West? ...But the bigger problem, which now hangs over Europe is the fact that politicians who were happy to open their borders for free trade failed to spot that this inevitably meant that their countries' own standard of living would inevitably be undermined.

At first it was easy to turn a blind eye, and just think that Eastern countries were backward places that were unlikely to compete with the West. But inevitably, with their immeasurably higher populations and their improving standards of education, the West was going to be put under pressure by the lower costs in the East. Westerners who were complacent about their prosperity failed to understand that although they were in the richest 10% of the world population, that position was not guaranteed.

The real failure, of course, not that you will hear it on the radio, is not Capitalism but Socialism, which we all learnt at the time of the collapse of the Berlin Wall was unsustainable. Unfortunately Western politicians on the left side of the spectrum didn't listen. They found that companies didn't invest when they put up taxes, and in fact moved all their new investment to other parts of the world. So in order to keep their captive voters happy, they borrowed money to finance present government consumption, which they erroneously called "investment". Leaving aside the Italian Cosa Nostra basket case, Greece, Portugal, Ireland and Spain, the most heavily overborrowed of the Eurozone countries, have all had one thing in common for the last 10 years: left of centre governments. Just like the UK, the most overborrowed of the lot currently.

You won' hear it on the BBC, but the real problem is that Western social welfare has placed an impossible burden on states, which is why the UK has a current annual deficit of €200 billion, i.e. on its own 20% of the amount of funding sought by the EFSF, although this is a recurring shortfall for the UK government.

Doctors expect to be paid hundreds of thousands of pounds to provide cradle to grave healthcare for many who have never and will never pay much into the state coffers, while other civil servants expect six figure salaries, generous pensions and early retirement, all to be paid by a private sector that is constantly undercut. In the long run, none of them should have any reason to expect to be paid any more than their Chinese or Indian equivalent as the economies of the East align themselves closer to those of the West.

If the governments of Greece, Italy, Spain, Ireland, Portugal or the UK were companies, their respective cash shortfalls would have pushed them into insolvency years ago, and their problems will continue until their spending is cut to realistic levels. '

Alex is right but there are too many people who don't want to face facts and that is why the future for Western Europe is protests, riots and a breakdown in civil society. I am sorry if that thought is hard to take in but it is more likely than us all living happily ever after.

Go out and buy tinned food, a generator & stocks of fuel for it; but more importantly get a gun and some ammunition, because if you were scared by the riots of a few months ago, you ain't seen nothing yet!
Posted by Not a sheep at 18:00

Hard to get hold of a gun, but should these ever become available in the UK......
http://foggy-mirror.blogspot.com/2011/10/and-then-some-truly-serious-diy.html

Having had cause to use a normal nail gun for the first time last week, I think I can see the appeal of that DeWALT item!