Anne Frank in a Kaffiyeh

Anne Frank "was a German-born Jewish girl from the city of Frankfurt, who wrote a diary while in hiding with her family and four friends in Amsterdam during the German occupation of the Netherlands in World War II. Anne and her family moved to Amsterdam in 1933 after the Nazis gained power in Germany, and were trapped by the occupation of the Netherlands, which began in 1940. As persecutions against the Jewish population increased, the family went into hiding in July 1942 in hidden rooms in her father Otto Frank's office building. After two years, the group was betrayed and transported to concentration camps. Seven months after her arrest, Anne Frank died of typhus in the Bergen-Belsen concentration camp, within days of the death of her sister, Margot Frank. Her father Otto, the only survivor of the group, returned to Amsterdam after the war to find that her diary had been saved, and his efforts led to its publication in 1947. It was translated from its original Dutch and first published in English in 1952 as The Diary of a Young Girl. The diary, which was given to Anne on her 13th birthday, chronicles her life from June 12, 1942 until August 1, 1944. It has been translated into many languages, has become one of the world's most widely read books, and has been the basis for several plays and films. Anne Frank has been acknowledged for the quality of her writing, and has become one of the most renowned and discussed of Holocaust victims."


The Kaffiyeh "(Arabic: كوفية, kūfīyä; plural: كوفيات, kūfīyāt) is also known as a shmagh, shemagh or yashmag (شماغ, šmāġ), a ghutra (غترة, ġuträ) or a hatta (حطّة, ḥaṭṭä), and is a traditional headdress of Arab men, made of a square of cloth ("scarf"), usually cotton, folded and wrapped in various styles around the head. It is commonly found in arid climate areas to provide protection from direct sun exposure, as well as for occasional use in protecting the mouth and eyes from blown dust and sand... In the 1930s, the keffiyeh became a symbol of Palestinian nationalism as a result of its association with rural areas (as opposed to the city-dweller's fez).

The keffiyeh would later become a trademark symbol of Yasser Arafat, who was rarely seen without his peculiarly arranged black-and-white scarf (only occasionally did he sport a military cap or, in colder climates, a Russian-style fur hat or Ushanka). Arafat would wear his keffiyeh in semi-traditional manner, around the head and wrapped by an agal, but he also wore a similarly patterened piece of cloth in the neckline of his military fatigues. Early on, he had made it his personal trademark to drape the scarf over his right shoulder only and arranging it in the rough shape of a triangle, so resembling the outlines of Palestine. This way of wearing the keffiyeh in turn became a symbol of Arafat as a person and political leader, and it has not been imitated by other Palestinian leaders.

Another Palestinian figure associated with the keffiyeh is Leila Khaled, a female member of the armed wing of the Popular Front for the Liberation of Palestine. Several photographs of Khaled circulated in the Western newspapers after the hijacking of TWA Flight 840 and the Dawson's Field hijackings. These often included Khaled wearing a keffiyeh in the style of a Muslim woman's hijab, wrapped around the head and shoulders. This was unusual, as the keffiyeh is associated with Arab masculinity, and many believe this to be something of a fashion statement by Khaled, denoting her equality with men in the Palestinian armed struggle. The use of the keffiyeh as a hijab remains very uncommon, and to the extent it exists, it must be assumed to be a personal political statement. The colors of the stitching in a keffiyeh are also vaguely associated with Palestinians' political sympathies. The iconic "spider-web" black-and-white keffiyeh is often displayed symbolically by members of Arafat's Fateh party (which more generally uses yellow as its party colour), although it has never been able to expropriate it as their exclusive symbol. This is in contrast to how many members of the radical leftist PLO factions (such as PFLP, PFLP-GC DFLP) prefer the checkered red keffieyhs — red being both the traditional colour of the workers' movement and the red scarf supposedly more indicative of a bedouin and rural (thus poorer, more popular) background. The Islamist factions, such as Hamas, use green — representative of the Islamic faith — as a party color, but for keffiyehs they stick to the traditional black-and-white or red variants, with no particular preference evident. While widely known, this color symbolism is by no means universally accepted by all Palestinians, and its importance should not be overstated — red or black-and-white scarves are used by Palestinians of all political stripes, as well as by those with no particular political sympathies." 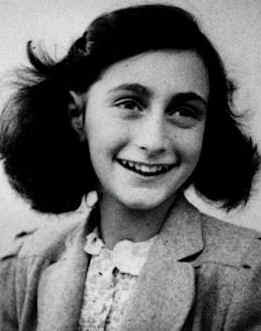 on the other hand a garment worn by people as a symbol of Palestinian nationalism. "Increased sympathy and activism by certain Westerners toward Palestinians in the Israeli-Palestinian Conflict in the years of the Oslo Peace Accords and Second Intifada have led to the wearing of keffiyehs as a sign of their solidarity with Palestine and the Palestinian people -

So what finer idea than to merge the two? 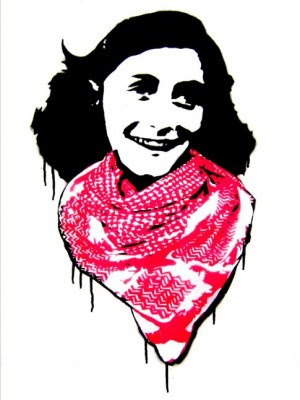 If you want to buy a 'Banned Frank' by T. then do visit thsi site. Maybe Meer van Redactie would be interested in your views on his art.


UPDATE:
There is an update to this story here.

Email ThisBlogThis!Share to TwitterShare to FacebookShare to Pinterest
Labels: Islamisation of Europe

Wow, I thought I was reading a thoughtful, fact-based article without any particuler agenda, but then you break out the bigot stick and smack us in the face with it.

A more stunning example of a strawman it would be hard to imagine, nor a more heinous one.

(by the way, since it's obvious that you don't actually pay any attention to world affairs, but the Palestinians have recognized Israel's right to exist, which makes your argument not only illogical and racist, but also very, very wrong.)

So NaS makes a valid observation and we have a semi-hysterical comment containing inflamatory words like "bigot stick" and "racist" thrown at him.
It's time to ridicule buffoons who fling this term "racist" about at the drop of a hat.
Perhaps you'd care to enlighten me goldfish as to exactly what was "racist" or "bigoted" in any of this.

Oh, and for the record I still have my shemagh, I used to wear it quite a lot to protect me from the dust and sandstorms when I was working in the Arabian peninsular in the 70s. Do you wear yours as a fashion statement?

The back of the hill said...

I own two kaffiyot, one black and white, one red and white. They make stellar table-cloths, and are super absorbent.

I never wear them. A civilized man has no need to wear a tea-stained table-cloth.

It’s the pattern of the universe.