The Palestinians and the Arab countries are the masters of the power of propaganda, just take a look at the following links for some historical context - here, here and here.

Now you can see that the latest "power cuts" in Gaza have been manipulated. Did you see the photos from Reuters described as being of "Palestinian lawmakers attend a parliament session in candlelight during a power cut in Gaza January 22, 2008. REUTERS/Mohammed Salem". This is one of those photos - 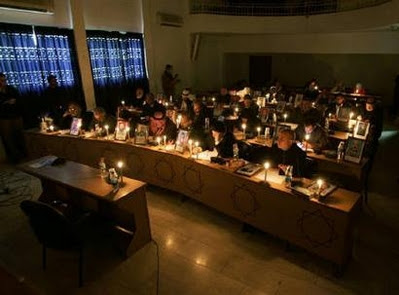 Do you notice something odd about this photo? I'll give you a clue, why are they using candles? Presumably because there is no electricity to power the lights. Now look at the curtains, they are drawn but it is still daylight outside, so why do they need the candles? The answer is they don't, it is just a put up job. You can see more on this matter here.


You can also read about it at The Jerusalem Post in a piece entitled "Palestinian journalists: Hamas staged blackouts" written by "KHALED ABU TOAMEH" that would be a Muslim working as a journalist for an Israeli newspaper, I wonder how many Jews are employed as journalists by newspapers in Muslim countries.

It is rumoured that The Arab News had the same story but I have been unable to find it there.