"How many are children?"

Last night I posted a piece about the upcoming release of Gilad Shalit. I included this thought:


'The price for the release of this Israeli soldier? That would be the release of hundreds of Palestinian prisoners. How many of those being released have killed or assisted in the murder of Jews in Israel? How many will kill or assist in killing in the future?' 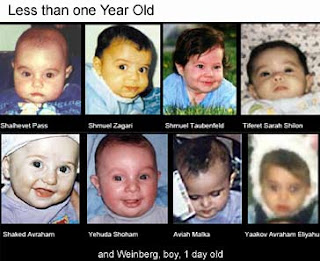 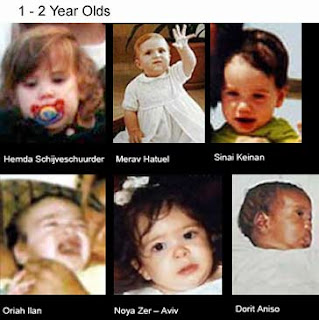 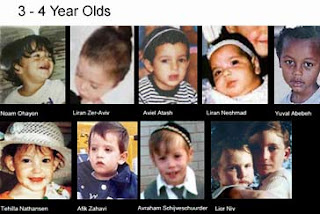 That's just those aged less than five years of age. If you want to see the faces of the older children murdered or maimed by Palestinian terrorists between 2000 & 2006 take a trip to Daled Amos. The murdering of Jewish children did not stop in 2006, do you remember the Fogel family brutally murdered in their beds earlier this year? 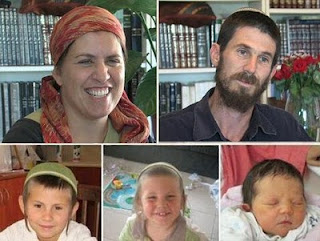 So no, I do not know how many Palestinian children are being released, nor do I know of what crimes they were convicted. I know that many Palestinian terrorist atrocities have been or have used children in their commission. I also know that the Palestinian establishment brainwash their children to hate Jews and to see martyrdom as a desirable objective, I have posted on that subject many times before.


Earlier yesterday Alex a regular commenter asked me this:


'I notice you have made a huge number of Israel-related posts. Is there any particular reason you're so interested?'


'I do seem to have made a lot of Israel related posts recently and it does trouble me slightly. This blog was not set up to cover Israeli issues... I am not Israeli, indeed I have never been to Israel; however I am Jewish. ... I see the barrage of hate that is fired at Israel by western liberals, especially the BBC, as vile and unfair.

I see the Isael question as one of the great moral questions of our time. I don't agree with every supporter of Israel but I find that anyone who opposes Israel is probably someone that I would not want to have dinner with.'

I think that the anonymous commenter that I quoted in the title of this piece fits into the latter of those two categories.

Clearly the killing or imprisonment of any child is wrong, regardless of their nationality. Was simply making the point that children on both sides of the conflict suffer - what exactly is wrong with that position?

Oh, and I was thinking of doing lasagne...

I would say the killing of any child is wrong. Imprisonment would depnd on what the child in question had been found guilty of doing. If the child was guilty of murder, attempted murder, violent assault or other serious crimes then why should they not be imprisoned? Hamas and Hezbollah use children as weapons and as willing covers for their terrorist activities; should such children be exempt from punishment? The age of criminal responsibility is 10 in the UK. I know plenty of under 10s who know the difference between right and wrong, and more should know the difference.

Sorry I already have sausages under the grill...

Hmm. By thinking as you do you are perpetuating the separation, keeping apart by coming out on the 'other side' from the side you hate.
Would it be so wrong to say that BOTH sides are killers and BOTH sides have, most likely EQUALLY, killed children and innocent people of all ages?
Would it be impertinent to suggest that BOTH are living in the past and that, in todays world, to kill for religion is tantamount to treating people as animals. We really can know better.
ANY child killed is an innocent victim. There is no such thing as collateral damage and Israel are certainly not innocent as Palestine are neither.
I think posting such things are bringing down the fun side of the site in my opinion, a pity as I recently found (and started to enjoy reading) you.

Paul H: Oh dear oh dear, you really don't get it do you? Time for a some light Fisking I feel:

'Hmm. By thinking as you do you are perpetuating the separation, keeping apart by coming out on the 'other side' from the side you hate.'
I don't 'hate' the 'other side'. However even if I did, I would do nothing more than blog. The 'other side' blow up pizza parlors full of innocent teenagers, slit the throats of innocent children & their parents and are on record as wanting to kill all Jews in Israel & the rest of the world. Tell me, who is full of hate?

'Would it be so wrong to say that BOTH sides are killers and BOTH sides have, most likely EQUALLY, killed children and innocent people of all ages?'
Yes, it would be quite wrong. Islamic terrorists deliberately set out to kill as many innocent Jewish adults & children as possible. By way of contrast the Israeli armed forces do all they can to not kill innocent Palestinian children, even when they are being used as human shields by their Hamas or Fatah terrorist elders.

'Would it be impertinent to suggest that BOTH are living in the past and that, in todays world, to kill for religion is tantamount to treating people as animals. We really can know better.'
If you characterise believeing in religion as 'living in th epast' then maybe you have a point BUT there is an important distinction - Islamic terrorists, as products of centuries of brainwashing kill on behalf of their religion (or maybe a perverted idea of that religion - that is a bigger point), israel kills to protect itself from destruction. If you want to test that theory, ask yourself this - If the Palestinians laid down their weapons and recognised Israel's right to exist, what would happen? Would Israel let the Palestinians live in peace? If however Israel disbanded its armies and the Palestinians did not, what would happen? Would the Palestinians let Israel live in peace, alive?

'ANY child killed is an innocent victim.'
Is that ALWAYS the case? What if a 15-year old Palestinan decides to try and blow themselves up in a crowded Jerusalem cafe thus killing dozens of teenage Jews. Would you call that 'child' an 'innocent victim'?

'and Israel are certainly not innocent as Palestine are neither.'
Well you are half right, quite good for you.

'I think posting such things are bringing down the fun side of the site in my opinion, a pity as I recently found (and started to enjoy reading) you.'
The fun things are an aside not the point of this blog, if you don't understand that then...

'I don't eat sausages...or Lasagna'
That's OK I don't think I would want to partake of dinner with you.