My Firefox crashed yesterday, taking 30+ tabs with it but even so I have more open then I can ever blog about in the coming week;


'Pro-democracy activists in Syria called for fresh protests on Saturday after the alleged torture and killing of a 13-year-old boy by security forces in the flashpoint region of Daraa.

The body of Hamza al-Khatib was returned to his family on Wednesday, following his disappearance after a demonstration on April 29, activists said on their Facebook site, Syrian Revolution 2011.

"We will go out from every home, from every district to express our anger" over the killing, they wrote on the page which carries a picture of the boy.

"A month had passed by with his family not knowing where he is, or if or when will he be released. He was released to his family as a dead body. Upon examining his body, the signs of torture are very clear," they said.

"There were a few bullets in his body used as a way of torture rather than to kill him with. Clear signs of severe physical abuse appeared on the body such as marks done with hands, sticks, and shoes. Hamza?s penis was also cut off."'

I await the protests from the leftist elements who would be up in (metaphorical) arms had this been Israel at fault; I think I will wait in vain.


2) The Telegraph and The Mail have the photographic proof that Samantha Cameron is fit; in both senses of the word.


3) Mary Sean Young has some fascinating Polaroids from the set of Bladerunner, here's one... 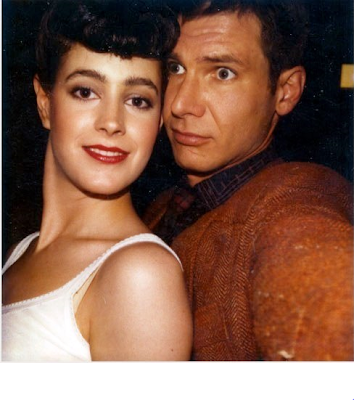 Rachael and Deckard together...


4) The Telegraph report on what happens when occupational health departments need to ensure they generate work to keep them employed:

Among the pearls of wisdom offered in the documents are that officers should assist their spouses with household chores and do activities such as gardening and dancing to keep fit.

The guides even offer advice on what fillings officers should have in their sandwiches. '

5) ZeroHedge think that DeSpiegel are taking a risk of being sued by Greece:


'Germany's Der Spiegel seems hell bent on getting sued to hell and back by Greece. After a few weeks ago it "broke" the news of a secret meeting that would consider the expulsion of the country from the Eurozone, it is once again stirring passions with an article claiming that Greece has missed all fiscal targets agreed under its bailout plan, according to a mission from an international inspection team, putting further funding for Athens at risk, Reuters summarizes. "The troika (aka the International Monetary Fund, the European Commission and the European Central Bank) asserts in its report to be presented next week that Greece had missed all its agreed fiscal targets," weekly Spiegel magazine reported in a prerelease. In other words, this could be the political game over for Greece, whose fate as has been disclosed recently, is intimately tied with the perception that it is following the troika's demands for fiscal change. If the three key bailout institutions are already leaking that Greece is done, next week could well be the beginning of the end for the €.'

Is that true, is the Eurozone about to fall apart as Greece fails to meet its targets? Does this mean that David Cameron will stop promising money to ailing EuroZone countries? Does this mean that those people who called for the UK to join the Euro will now admit their mistakes and that William Hague, John Redmond amongst others were right when they were being ridiculed for being 'little Englanders' and out of step with history?


6) Brian Lee Crowley in The Financial Post examines the premise behind the question “Are we running out of natural resources?” and explains why we are not. A good explanation that should be required reading for all eco-loons. Here's the conclusion:


'We are nowhere near to running out of natural resources. Human creativity and financial resources together will ensure a continued supply of all the resources we need. The exact form those resources will take cannot be known today, however. It relies on future innovations, which are, by their nature, unpredictable because they will be the fruit of our imagination and curiosity. That is why the human mind is the greatest natural resource of all.'

7) WireUpdate has some bad news for many visitors to Amsterdam:


'In an effort to stop drug tourism, the Dutch government on Friday decided to restrict access to cannabis coffee shops so that tourists will no longer be able to buy the drugs.

Coffee shops are establishments in the Netherlands where the sale of cannabis for personal consumption by the public is tolerated by the local authorities. As this is illegal in most countries, many tourists from around the world travel to Amsterdam to use cannabis.

But in an effort to reduce criminal behavior and tourism as a result of the drug policy, the Dutch government on Friday decided to introduce a membership system for coffee shops. The city of Amsterdam, where most tourists go, is against the decision

The new system will require members of coffee shops to be a citizen of the Netherlands and over the age of 18.'

This will not help the Amsterdam tourist industry and might make the drug-pushers in the Red Light district even more insistent...


8) The Other McCain has all you need to know about 'Weinergate', actually make that more than you probably want to know about New York Democrat Rep. Anthony Weiner's penis, BlackBerry


9) Noel Sheppard at NewsBusters wonders whether 'Hatred Towards Conservative Women is Last Acceptable Misogyny in U.S.'. here's an extract:


'Of course, Tantaros was correct.

What America has painfully learned since former Alaska governor Sarah Palin was first announced as John McCain's running mate in 2008 is that it is completely acceptable for media members to mercilessly attack a woman in print or on television and radio if she is a conservative.

In reality, not only is it condoned, it's applauded.

You can even win awards for doing so - just ask Katie Couric.

Sadder still is that the Left is constantly carping and whining about the scarcity of women in politics.

Maybe if they wouldn't attack every conservative female that deigns to enter public life there'd be more of them - or is that just too darned logical for a liberal?'

10) BizyBlog claims 'AP Reporters Fabricate Scurrilous ‘Possible’ Reason Why Walesa Wouldn’t Meet With Obama'. It's an interesting theory and one that should chime with anyone who realises quite how biased most of the world's media is in favour of Barack Obama. Investors Business Daily has the more plausible explanation:


' Someone who was awarded the Nobel Peace Prize for actually doing something just snubbed someone who won it for nothing. But Lech Walesa’s refusal to meet President Obama is also a cry to save Poland.

Lech Walesa, the former Polish president and heroic leader of the Solidarity trade union that helped liberate the entire Eastern European Soviet bloc from communist rule, has his moral courage indelibly engraved in the history books.

… on Friday, Walesa once again answered the call to duty and announced he would not accept fellow Nobel Peace laureate President Obama’s invitation to meet with him in Poland after the G-8 Summit in France.

… Close observers of this president for the two-plus years of his rule know he isn’t interested in listening to the likes of Walesa, any more than he wants to hear the leaders of former Soviet satellite states explain how the low, flat tax rates they adopted in recent years led their nations to double-digit GDP growth.

For the sake of preserving Poland’s hard-fought freedom, Komorowski and Tusk should be joining Walesa in giving Obama the cold shoulder.

The president hadn’t even had a chance to redecorate the Oval Office before he felt the need, in fall of 2009, to appease Moscow by scrapping plans to build a missile defense shield protecting Poland and the Czech Republic from attack by Russia, Iran or any other aggressor.

At the time, the Polish minister of defense said, “This is catastrophic for Poland.”

The message, once again, delivered loud and clear to America’s friends, allies and enemies alike, is that the U.S. can’t be relied on.

… The message Poland’s leaders should deliver to our self-satisfied president is the one Walesa is delivering by his absence: Neither your Nobel nor bin Laden’s head, Mr. President, is a substitute for U.S. help in keeping a liberated Eastern Europe liberated.'

That has cleared ten tabs, only another 20 or so to go!