Imagine if it had been George W. Bush

Imagine the furore on the BBC, the calls of what an uneducated idiot, if George W. Bush had signed his name with the wrong day or month. Have I Got News For You and The News Quiz would have been using it for 'material' for months. However as it is Barack Obama who actually put the wrong year down, putting 2008 instead of 2011 under his signature in the visitors book at Westminster Abbey, I predict very little coverage on the BBC and no jokes, just as the coverage of Barack Obama choosing the wrong door at the White House received next to no coverage but that of George W. Bush doing the same received lots of coverage.

Here's the relevant signature and date. 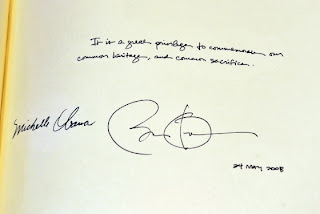 For more on this story, read NY Mag.


The BBC have a narrative to sell and a US President to get re-elected and unbiased news reporting must be bent to those aims.

I was raised not to mock the afflicted, those less intelligent than myself and to make allowances for those of different races who had not had the benefit of a good upbringing.

Perhaps the BBC are guilty of inverse racism?