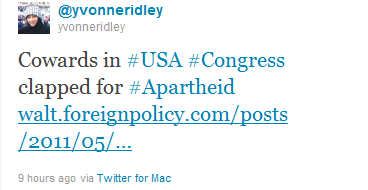 That was Yvonne Ridley's Tweet that I read this morning.

This accusing of Israel of being an 'apartheid state' has got to stop as it isn't true and also because the Islamic states near Israel are far closer to being apartheid states than is Israel.

Here are some examples as to why Israel is not an 'apartheid state':

1) From May this year the story that:


''Hundreds of people are estimated to flee Eritrea every month, often making risky journeys to reach Europe or Israel in search of better opportunities.' The BBC report

a strange tale of people fleeing Eritrea and wanting to go only to Europe or Israel; the story really does not fit with the BBC's usual portrayal of Israel as vile 'apartheid state'.'

2) From March the story of Rania Fadel, an Israeli Arab who belongs to StandWithUs and takes real exception to Israel being characterized as an Apartheid state. A video well worth watching.


3) From January the story of tennis standout Nadine Fahoum and her mother, Wafa Zoabi Fahoum, a lawyer by trade, who was formerly the head of Beit Hagefen, a non-profit organization in Haifa that works toward improving relations between Arabs and Jews. As I asked in January 'What is wrong with Israel that an Arab girl can do so well and represent her country from 2003 to 2008? Israel the apartheid state; I think not.' Contrast that with the attitude of many Islamic states who refuse to allow Israeli sportsmen to enter tournaments in their countries and sometimes all Israelis.


4) From November 2010: In Jerusalem, Israel's capital stands the Dome of the Rock and the Al-Aqsa Mosques, entry to which is forbidden to Jews; this is in the capital of the 'apartheid state'. Meanwhile in Saudi Arabia no non Muslim is allowed to enter Mecca.

This situation in Jerusalem contrasts starkly with the state of affairs that existed in Jerusalem between 1948 and its liberation in 1967. During the 1948 Arab-Israeli War the Old City including the Wailing Wall were captured by Jordan. Article VIII of the 1949 Armistice Agreement provided for Israeli Jewish access to the Wall. However for the following nineteen years, despite numerous requests by Israeli officials and Jewish groups to the United Nations and other international bodies to attempt to enforce the armistice agreement, Jordan refused to abide by this clause as part of a policy of Islamization. Some sources claim Jews could only visit the wall if they travelled through Jordan (which was not an option for Israelis) and did not have an Israeli visa stamped in their passports. Others say Jordan even barred non-Israeli Jews, demanding that tourists present a certificate of baptism before a visa would be granted.

The most sickening thing about this, is that if you presented this information to the sanctimonious hypocrites that call Israel an apartheid state they wouldn't even care. They 'know' the 'truth' and everything else is irrelevant. They know that Israel is an 'apartheid state' and nothing will change their sick, closed, hate-filled minds.


5) In 2007 I explained that Israel was not an 'apartheid state' but that many Islamic ones were:


'Saeb Erekat, one of the PLO/PA's most senior spokesman recently declared that the "Palestinians" will never recognize Israel as a Jewish state. He was speaking on Palestine Radio Monday when he gave the rationale for the "Palestinian" position. "There is no country in the world where religious and national identities are intertwined,". An interesting position to take and of course one that is frequently referred to by the "Israel is an apartheid state" crowd.

Just remind me why Israel is an apartheid state and not Saudi Arabia...

*
"Saudi Arabia is an Islamic monarchy and the Government has declared the Qur'an and the Sunnah (tradition) of Muhammad to be the country’s Constitution. Freedom of religion is severely limited. Islam is the official religion, and all citizens must be Muslims. The Government prohibits the private and public practice of other religions. The Government bases its legitimacy on governance according to the precepts of the rigorously conservative and strict interpretation of the Salafi or Wahhabi school of the Sunni branch of Islam and discriminates against other branches of Islam."

"Under Saudi law conversion by a Muslim to another religion is considered apostasy, a crime punishable by death if the accused does not recant."

"The Government does not permit non-Muslim clergy to enter the country for the purpose of conducting religious services, although some come under other auspices and perform religious functions in secret. Such restrictions make it very difficult for most non-Muslims to maintain contact with clergymen and attend services. Catholics and Orthodox Christians, who require a priest on a regular basis to receive the sacraments required by their faith, particularly are affected."

"Proselytizing by non-Muslims, including the distribution of non-Muslim religious materials such as Bibles, is illegal. Muslims or non-Muslims wearing religious symbols of any kind in public risk confrontation with the Mutawwa'in. Under the auspices of the Ministry of Islamic Affairs, approximately 50 so-called "Call and Guidance" centers employing approximately 500 persons work to convert foreigners to Islam. Some non-Muslim foreigners convert to Islam during their stay in the country. According to official reports, 942 foreign workers converted to Islam in the past year. The press often carries articles about such conversions, including testimonials. The press as well as government officials publicized the conversion of the Italian Ambassador to Saudi Arabia in late 2001."

"The Government requires non citizen  residents to carry a Saudi residence permit (Iqama) for identification in place of their passports.[4] Among other information, these contain a religious designation for "Muslim" or "non-Muslim."

"Until March 1, 2004, the official government website stated that Jews were forbidden from entering the country"

"According to Alan Dershowitz, "in Saudi Arabia apartheid is practiced against non-Muslims, with signs indicating that Muslims must go to certain areas and non-Muslims to others.""

"According Saudi policy for tourists, it is not permissible to bring Christian or Jewish religious symbols and books into the kingdom and they are subject to confiscation" '

Yvonne Ridley says that Israel is an 'apartheid state'; is she misinformed or deliberately misleading people?

You wouldn't guess much of this by listening to the BBC !